by Emma Bannen, Director of PR

Greek Week and Derby Days are two of our favorite weeks of the year! What could be better than some friendly competition to win money for our philanthropy? Delta Gamma competed against other sororities on campus in Greek Week and Derby Days events to win money for Service for Sight. Keep reading to learn more about these super fun weeks from our vp: panhellenic, Ray! 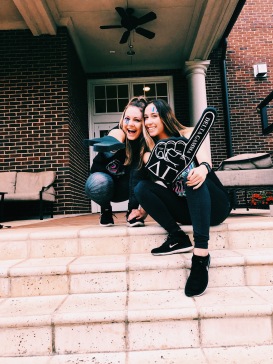 Greek Week is week-long competition between pairings of all the Greek Organizations on campus. This year, Delta Gamma was paired with Sigma Chi, Theta Tau, and Sigma Gamma Rho. The competition includes sporting events such as kickball, academic events such as trivia night, service events such as Habitat for Humanity, as well as a dance competition to end the week.

This year’s Greek Week stood out because every competition was close and it was exciting to see all our sisters compete so hard for Delta Gamma. The best moment of Greek Week this year was when it was announced that we won the overall Spirit Award for the week!

Ray said that being vp: Panhellenic made Greek Week different this year because she got to be the one to be in contact with the organizations we were paired with, which was amazing in getting to see how willing others were to participate in competitions for us, and how excited they were to cheer everyone on! Her favorite Greek Week event is the Greek Sing dance competition, because it is the most spirited event and everyone cheers for everyone. It’s always such a loud and positive environment that is just amazing to be a part of!

Delta Gamma finished the week in second place overall, won the Greek Sing competition (for the third year in a row), and won the overall spirit award! 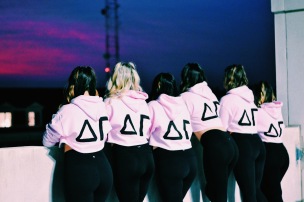 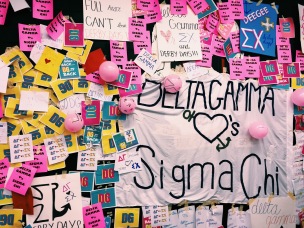 Derby Days is a week long philanthropy event for Sigma Chi that entails several different competitions between sororities on campus. Competitions include a water balloon toss, dodgeball, and a dance competition. This year’s Derby Days stood out because we had a large target on our back due to winning Derby Days last year and placing so well in Greek Week this year, which makes the events that much more exciting!

Ray’s favorite Derby Days event was the House Decorating competition. She says,”It was really cool to get to cover the Sigma Chi house in things that said Delta Gamma and get to interact with members from all of the other organizations. The best moment of Derby Days this year was sitting in the basement for almost 4 hours making posters for the House Decorating with some sisters that I haven’t gotten to previously spend much time with!”

Greek Week and Derby Days were great opportunities to spend time with our sisters. A little bit of friendly competition is an amazing way to bond with sisters from our chapter and the entire panhellenic community!

Message from the President

“Growing up as a military kid, I wanted to find a core group of people to be my home early on at The University of Alabama. I found that immediately in Delta Gamma. Because of this chapter, I have made lifelong memories and friendships and developed my leadership abilities. Each day I wake up in the house, I am reminded that I am where I am supposed to be and I wouldn’t trade that feeling for the world. Delta Gamma is my home and I am so excited to continue to foster that feeling for the women of this chapter. I believe that being intentional in our scholarship, service, sisterhood, and membership will encourage all to find a home in Delta Gamma!”